BlogFlorence, Tuscany, and UmbriaOff the beaten path in Umbria: an artist’s top 10 places 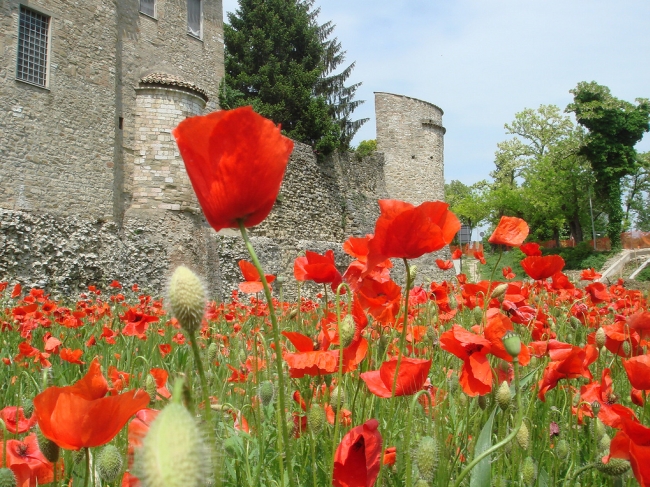 Off the beaten path in Umbria: an artist’s top 10 places

Today’s guest post is by Graham Dean, a British artist with a house in Umbria. Thanks Graham! Umbria is said to be associated with ombra, which means shadow in Italian, and indeed for years it seems like Umbria has been in Tuscany‘s shadow. But now the region is starting to show itself, bit by bit.  Here is a short guide to the bits that have seduced me. Many people have heard about Assisi, Perugia, Gubbio, Spoleto, Spello, Todi; all beautiful, wonderful places and all served very well by the guide books , but I’m pointing a torch in other directions.

This is first because it’s just too beguiling. Lake Trasimeno is Umbria’s largest lake and has three islands, with ferry service to two of them. It has a magical, shimmering, silvery quality to it that sometimes qualifies the Umbrian reputation for mysticism. If you had to describe a place as poetic, then this would be it. We usually start from the town of San Feliciano on the eastern shore, and take the ferry to the Isola Polvese, a nature reserve. You won’t find too many tourists here, not even at the height of summer. We learned from the locals that it is the best place to go swimming complete with its own beach, so bring your bathing suit. There is also a cafe, restaurant, castle and a myriad of birdlife. This magical island is so small that you can walk around the entire thing in about 45 minutes. This small town is not far from Lake Trasimeno and it’s the closest you will get to a Hollywood film set idea of what an Umbrian village should look like. Panicale is a walled Medieval town with a classic small square with a well-known cafe that puts on free jazz concerts outside in the summer. There always seems to be something going on here from a festa to exhibitions – it’s a great stop over spot for coffee or a gelato, and we never skip it if we are showing friends the area. One of those places guaranteed to get a “Oh, I like this place! Can we see more of it.”

A bit south from Panicale, this red bricked town looks more Tuscan than Umbrian and is the birthplace of Perugino, Umbria’s big boy Renaissance Artist who taught Raphael. (Perugino was allegedly a poor, bitter artist who would do anything for money and to be honest sometimes his work looks like that but they love him around here.) But here is the star: the town itself is handsome and has a good cafe culture with many events. A town with lots of events seems to be a marker on whether a place is open and thriving or closed up and not welcoming. And I have been to a few of the latter: your footsteps echo across the cobbles, a dog barks; but there’s little else to do or see. This one is a real hidden gem and I will defy anyone not to be surprised at this fantasy folly. Difficult to explain in words, it really has to be seen to be believed and it’s big. Built in 1956 by Tomaso Buzzi and apparently still being added to, La Scarzuola is a strange collection of fantastical buildings, some look inspired by Salvador Dali. Since my last visit, a gigantic naked female torso has been added: she must be 40 feet high and alone is worth the admission price. If you want to visit, contact them in advance to book the 2-hour guided tour. Montefalco is known as an unspoilt gem. It’s in wine country so anyone interested in vino rosso especially should visit here as it is the home of Sagrantino de Montefalco, Umbria’s flagship wine. Montefalco also hosts a wonderful wine festival in September. We are lucky to be in such a good wine making belt and even our local cantina makes excellent vino for a mere 1.60 euro a litre. This where I go with my 5 litre canisters – artists need fuel to help them in their work!

Only 7 km away from Montefalco is the small town of Bevagna, a place I took to immediately. Our first visit was at lunchtime when everything is closed for the midday pausa. The town looked impressive and had what only can be described as having a ‘feel’ to it. Bevagna has some famous Roman baths with amazing mosaics of sea creatures [link in Italian].

We take the back roads over the mountain to Orvieto which is a great way to first see this Etruscan city perched on top of volcanic rock. There are many interesting things to do there: the Duomo or cathedral, St Patrick’s Well, and Orvieto Underground are some of my favorites. Orvieto itself whilst obviously accommodating tourism still feels like a normal working place where people live. On our way back we stop at our favourite restaurant in the small village of San Vito in Monte called Piccolo Mondo. It has fresh fish at weekends which was a surprise to me given that the coast is a few hours away. I have a small painting hanging behind the bar there after they requested if I had a print of my work – instead I gave them an original and it got me a free meal. Piccolo is my regular hang out if such an idea exists in Italy. The Marmore Falls are a huge series of waterfalls created by the Romans and can literally be turned on and off by a tap at certain times during the summer. This is Italy’s second highest waterfall and there is a path up there to prove it. It’s a great picnic spot, full of locals and is certainly worth spending a few hours on a hot day. You used to be able to walk underneath the falls in a high up tunnel. Very popular with Italian boys taking their girlfriends there for reasons of getting their clothes wet! It’s recently been restored and there are daytime and nighttime tours. Byron even wrote a poem about the Marmore falls!

North of Perugia, Montone is known to many as Umbria’s prettiest village. It is also the home of Terry Gilliam who runs the small Umbria film festival there every summer. Montone is splendid during the film festival when they have a screen in the square and seemingly random plastic chairs dotted around the cafes to watch the movies. It reminded me of Cinema Paradiso.

The tenth pick is a strange, very strange place that was far better than I ever thought. (It’s actually over the border so technically in Lazio but so close to Umbria that it’s included in this list!) It’s called the Monster Park at Bomarzo but that is a misleading title. Created in the 16th century, it became completely overgrown until 1954 when the new owner started unearthing these gigantic sculptures of myths and legends. Only photos can do this justice – I have to say this was one of the best days out I’ve had in Umbria. The quality of the work surprised me and one theory is that it may have been the work of Michelangelo’s students to try their hand out on large stone carvings. There is also a small building built like an Escher drawing which was the oddest thing I have ever set foot in – my sense of balance and perception was sent sideways. There is an expression, “Umbria speaks in silences”. I’ll stop here as it appears I’ve already said too much.

Author’s bio: Graham Dean is an Artist with a house and studio in Umbria, Italy. The house, c. 1650, is between Perugia and Todi and is encircled by a river where we swim in large rock pools. The art studio looks directly down the valley and woods. Painting sometimes has its many distractions.