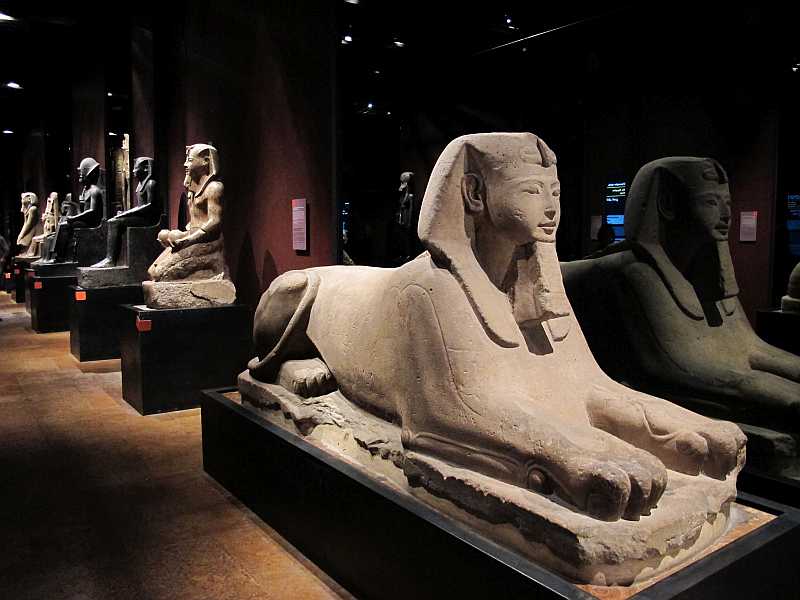 Traveling to Italy to visit an Egyptian museum might sound a little too beyond the obvious for many travelers, but for anyone who is a fan of Egyptian art, I would argue that the Turin Egyptian Museum cannot be missed.

The collection is considered to be one of the best in the world, second only to the museum in Cairo, and re-opened in early 2015 after an extensive renovation. I visited with my friend Roberta, a native from Turin, and she was amazed at the museum’s transformation. She remembered it pre-renovation as a dusty collection of poorly displayed seemingly random pieces. It’s now a well-organized and modern temperature-controlled space that gives any visitor the context needed to appreciate Egyptian art and culture. Great signage provides maps and details of excavations as well as descriptions in both English and Italian. The people in the photo are not on their cell phones, they’re listening to the great audio guide.

I know you’ve got limited time in Italy, so let me address this first. With 3,300 items displayed over 10,000 square meters / 108,000 square feet (and another 26k+ in archives), this is not a pop-in-and-pop-out sort of place and may seem overwhelming, but the Turin Egyptian Museum is one of the best-designed museums I have ever visited so you will get a lot out of whatever amount of time you can dedicate to this museum.

Included with every entry ticket is an audio guide, so there’s no additional cost and no additional line to pick one up. Visitors can choose a language on the touch screen, so I listened to the English version and Roberta listened to the Italian – both were excellent. The main menu is easy to navigate, and we quickly calculated that the number of rooms and the number of entries and sub-entries for each room was too much for us to cover in two hours, so we decided to cover two displays from each room in order to get through the whole museum.

Although the collection began a couple centuries ago as private acquisitions by an Italian named Bernardino Drovetti, curators have done an excellent job of filling in the gaps and buying additional pieces to create a comprehensive collection of Egyptian art and cultural artifacts. The collection includes both important items and everyday items – for example there’s a display on the foods Egyptians ate which includes some (very old and very dry) bread. The Stela of Inheretnakht with hieroglyphs, from about 2000 BC; sarcophagi; the contents of a burial chamber

Scrolls are an important part of any Egyptian collection, and this museum has many. Scrolls were often found in burial chambers and contained detailed instructions written in hieroglyphics about how the individual should navigate the afterlife. One of my favorite sections (photo bottom left) was a collection of drawings displayed in a 3D reconstruction of the room where they were originally found. Even the views from the windows in the original space have been re-created. Art in situ (on-site) is best, but when that’s not possible, the next best thing is to give the viewer as much context as possible, and that’s where this museum excels. Bottom left: the “in situ” room; Top: detail from the scrolls on bottom right. Bottom middle: oh MY.

One of the most important scrolls – named the Turin Papyrus – lists the names of the 15th Dynasty kings and their years of reign. Do not miss the last few rooms of the collection. Designed by an Italian cinematographer, these rooms have a definite wow effect due to the mood created by the lighting for the giant marble statues. Left photo: No Egyptian collection is complete without a statue of Ramses II. This statue is from the 19th Dynasty, about 1200 BC

There are lots of great reasons to go to Turin — Torino in Italian — and after having experienced this museum, I’d say it will be a highlight of any visit!